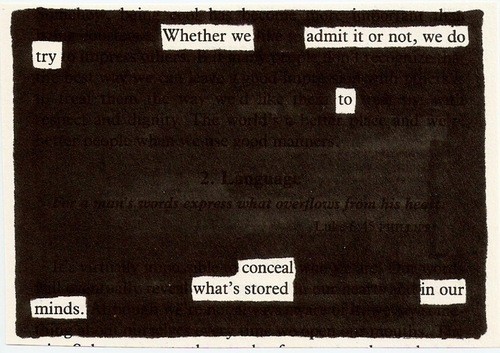 you can never know what's going on in someone's mind. the same goes for everyone else; they don't know what's going on in yours. somethings are concealed intentionally, while others are simply stubborn and can't seem to manifest themselves into words. people are different in dealing with this. on the outside of the spectrum, some people push and try to get in; try to get the other person to talk. others don't push because they don't want to pry. and some are just not interested. on the inside of the spectrum, some people try and trick the stubborn thoughts out, by saying something else and hoping the other person can read between the lines. some people express these thoughts in action or product rather than words. and others have given up and stay silent. the truth is it doesn't matter where you stand, what matters is both sides together. finding someone to talk to, someone who never misunderstands when your words get jumbled. someone who hears everything you say when you say nothing at all, and is able to listen to what you're really saying. someone who pushes their way in to help you fish out something you need to say. that's why communication is so vital. because most of the times there are things we can't say unless someone's there to listen.

An artist is a creature driven by demons. He doesn't know why they choose him and he's usually too busy to wonder why...